I was born in Bucharest in September 1967. I grew up and lived there until I was 22. December 1989 found me in the streets downtown, among bullets, wounded and dead people, together with many other young people that desperately and fiercely wanted to bring a change in the country. I left Romania in June 1990 and I had no contact with it or the city for the following 4 years. In 1994 I returned and I had to get used to the local reality once again. I lived in Bucharest for the following 20 years. However I never felt I really belonged there. In May 2014 I left Romania and I no longer follow what happens in the city. But I do and shall always remember Bucharest and my life there. I always compare the city with other capitals in the world I travel to as a tourist. I have no idea how Bucharest looks from a tourist’s point of view. Being born there, my opinion is naturally influenced by my personal experience through childhood, adolescence, Communism, the eternal fear of the secret police, revolution, poverty, Americanization or the abrupt and chaotic transformation of the whole society following over 40 years of Communist rule including about 10 years of very strict dictatorial rule. 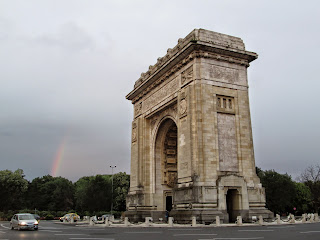 What I find ostensibly different in Romania compared to other European countries – talking about the status of a capital city – is that almost all other countries have several big cities which could successfully - and equally - represent the country as a capital. At the same time, this is far from reality in Romania. Only the last few years have seen things starting to change. As far as I am concerned, Bucharest is not the most representative big city in the country. The fact that nearly the entire economy and labor market is clinging to Bucharest is a wrong direction that on long term brings harm to the entire country and population. As a fluent German speaker I found it impossible to get a job in other major cities for 10 years. Why? Because most of the foreign investors go directly to Bucharest. It is there that the central authorities lie, it is there that trends are being drafted, it is there that the largest clients crowd and that useful business connections are being made. I see Bucharest more and more like a state within a state in many ways. I hope this situation will change more visibly in the coming years. I think this issue should be a top priority for the authorities.

Back to the city, I find that the far from ideal political and administrative policy of the last 25 years has unfortunately created not at all friendly conditions for the people living there. There are more stray dogs, cats and more vehicles than inhabitants; there are too few natural, green areas. And there is no architectural harmony anymore as nobody would had ever care to take care how the city will be designed and developed. Only the old residential zones still keep the flair and charm of the city which time ago was known as ”The Little Paris”.